This is the second in a sequence and is the equivalent of the second semester of US History. This course examines major and significant events in U.S. history between 1898-2012, including, but not limited to: American imperialism and the Spanish American War, the presidency of Theodore Roosevelt, World War I, the Roaring 20s, the Great Depression, FDR and the New Deal, World War II, the Holocaust, the Cold War, civil rights and the 1950s, Kennedy, Vietnam and the 1960s, Richard Nixon, the Reagan Revolution, the Clinton Years, George W. Bush’s “War on Terror” and the election and first term of America’s first African American president, Barack Obama. U.S. History is approved by the University of California A-G as a history/social science (category A).

Upon completion of this course, the student is awarded 5 credits. Each credit corresponds to 15 hours of study. Of course, some students work more quickly than others, and some can devote more hours to study, so some students are able to complete the course in an accelerated rate.

In this module, students gain a comprehension of the following:

This course covers the following topics: 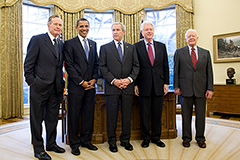